Wanna be good? Just do what he's doing!

How Safe is Mexico?

The news publications in the US have been backing off on the dangers of Mexico lately. Mainly because they have actual news to report and don't need us right now. So in the interim, here are some interesting facts comparing crime in Mexican cites to similar cities in the US.

I received this article by email the other day. I don't know where it was originally posted.
Enjoy.

Mexico is safer than other popular destinations.

Mexico, one of the world’s great travel destinations, is often singled out for violent crime without telling the whole story. While there is sporadic violence along parts of the U.S. border, the majority of Mexico’s key tourism areas are not only safe, but safer than many other popular tourism areas.  COMPARE POPULAR TRAVEL DESTINATIONS >

The Yucatan is as safe as rural U.S. states.

The magnificent beaches and ancient ruins of the Mexican State of Yucatan are among the safest and most spectacular resort beaches in the world. Yucatan’s low homicide rate is lower than the rural U.S. States of Wyoming, Montana, Oregon and North Dakota, West Virginia and several others.  COMPARE U.S. CITIES TO MEXICO >

The U.S. State Department in Washington issues warnings about Mexico, yet Washington D.C. is four times more deadly than Mexico City. Washington’s murder rate has been cut almost in half in the last 10 years, but it still averages 24 per 100,000 vs. only 8-9 per 100,000 in Mexico City. How do you suppose the U.S. State department would feel if the Mexican government posted travel warnings for the U.S. capital? Mexico City is a cultural treasure that is larger than New York, London or Paris. In fact, it is about the same size as London and Paris combined.   LEARN WHICH AREAS OF MEXICO ARE SAFEST >

Understanding the size and scope of Mexico.

Mexico is the 14th largest country on the planet. Its famous beaches and cultural treasures are hundreds of miles away from isolated border violence. In fact, the U.S. State Department's travel advisory recommends avoiding only 4 of the country's 31 states. Take a 60-second crash course in Mexican geography and you'll feel smarter and safer.  LEARN WHY SIZE MATTERS >

“Mexico’s violence not as widespread as it seems.”

After months of sensationalized stories about Mexico's border violence, USA Today finally published a story about the media hype. While the story itself became an excuse to re-tell some of the sensational tales, it did set the record straight by comparing U.S. and Mexican homicide figures.  COMPARE VIOLENCE STATISTICS >
Politics & Profits drive sensational media.
Why is Mexico shown in a negative light? There is money to be made by sensationalizing violence. Drug cartels launch graphic attacks to secure and protect their turf. Media firms hype stories to sell more ads or magazines. And powerful politicians have an interest in slowing the growth of Latino voters in the U.S. Each group enhances perceptions with ulterior motives. The reality is simple: if you are in the drug trade looking for trouble, you can find it. If you are visiting Mexico’s touristic areas, you are safer than you are in many U.S. touristic areas.
Posted by . 0 comments

Email ThisBlogThis!Share to TwitterShare to FacebookShare to Pinterest
Labels: dangers of mexico, how safe is mexico?, mexico is safer 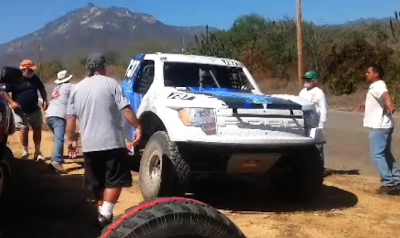 Another Cabo del Este is over and in the books. Donna and I parked out past Miraflores with the pit crew and watched until Donna's son Pat Ryan came by. He and his racing buddy Keith Cleary did pretty well. Keith took 2nd and Pat took 3rd in the 700 Truck class. Off road racing is probably the top bi-cultural event here in Baja. I couldn't come close to estimating the number of spectators from Mexico, the US and Canada that were there but it was hundreds for sure. If you've never caught an off race here, do it!
Posted by . 0 comments

If you like off-road racing, make plans to watch the Cabo del Este race that is being held on the 16th and 17th of February. This is always a good race. It's a fairly long race with lots of places to park and watch. Here is the course map; you can pre-plan your position. 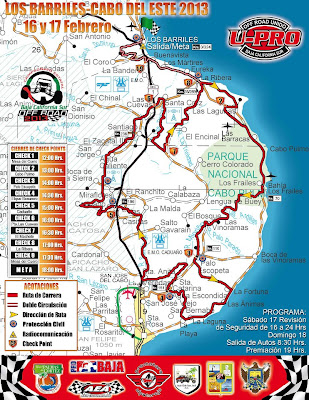 New Rules and Procedures for Immigration

I can't verify the information from this article but it seems to agree with what I have heard from others who have researched the new immigration rules.


This is from the blog, "Surviving Yucatan."


Effective Nov. 9, 2012: The INM started using the 2011 Law (Ley de Imigracion), with the regulations spelled out in the Reglamento, refined by the details in the Lineamientos. All together, they occupy roughly over 300 pages of government-speak legalese in Spanish. This article describes and summarizes the new issues visitors and foreign residents are currently working with when visiting or living in Mexico, including: How to Apply for Temporary Residency (Residente Temporal) or Permanent Residency (Residente Permanente). Since INM is changing and adjusting procedures daily as they implement the new Law, we have also created a simple post describing some of the latest updates at Updated Mexican Immigration Rules. As the changes settle down, and as Regional INM offices issue rulings and clarifications, there will be a consistent set of procedures for using the 2011 “new” INM Law. In the meantime Yucalandia is using this NEW master Immigration to Mexico article to cover all the current procedures. The following sections describe the current “new” basic requirements and procedures. * * * * * *

Click here to read the complete article.
Posted by . 0 comments 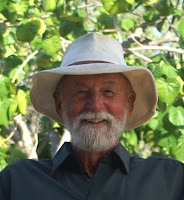 I don't think I've ever met a person who wasn't interested in whales. They are the largest mammals on the earth. Some species swim thousands of miles from Alaska to the Baja to have their babies and then swim the same thousands back with said babies. Moby Dick is fiction but it was based on true accounts of Sperm whales ramming whaling ships and sinking them. (A distant relative of my wife Donna, was on the Essex which was sunk by a Sperm whale, chronicled in "The Heart of the Sea.")

If you've ever seen a whale close up in the sea, you know how mesmerizing it can be: Beautiful and graceful, large and thrillingly scary when they are too close!

Not long ago while having coffee at Roadrunner Cafe, I met a man who has made a career out of watching whales, Urmas Kaldveer. Urmas has been doing scientific research on the great whales for years, observing them from all sizes of watercraft including his kayak and from below with diving gear. He sat with me for quite awhile, answering my uneducated questions with much patience. I was a little envious until it dawned on me that he has probably logged thousands of hours on his word processor while recording his work.  Whew!

If you see him around Los Barriles, you might be able to corner him and chat for a bit. If you do, don't tell him I said it was ok. If you don't have that chance, you can read in detail what he's done, learned and experienced in his book, THE OTHERS “The Whale People.” It was  published by Balboa Press and is now available on Amazon, Barnes & Noble and of course Balboa Press.

You can also read about many of his experiences on his blog which includes some great photographs.
Posted by . 1 comments

Posted from http://losbarrilesbcs.blogspot.mx/
We just returned from San Diego via Mex 1. The carretera just keeps getting better. There was very little construction and where there was, it was only for short distances. There are stretches of new pavement all the way down. The most impressive piece is the “Cuesta del Infierno” or "Hill From Hell" just North of Santa Rosalia. Feels like a whole different road. Wider, new lines and signs. Still make sure you have good brakes before traversing!

We cross at Tecate usually. Less traffic, reasonable inspectors. Plus we like driving through the wine country. Much of that road is new also. 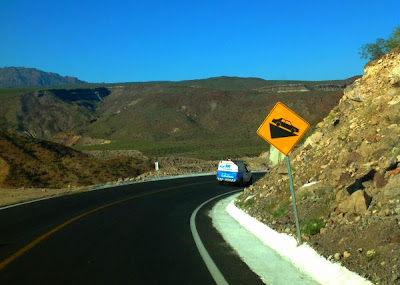 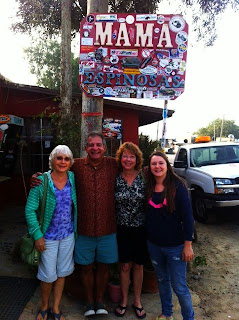 We stayed at a different hotel this time in Santa Rosalia, the Tourist Hotel on the South end of town. (somehow our reservations at the Baja Cactus were lost...) Nice place. Less fancy but new and clean and secure.   Ate breakfast at Mama Espinosa's.

Since we were pulling a trailer and our pickup was loaded, we took 3 days to get home. There are plenty of gas stations now but before crossing the dead zone between el Rosario and Guerrero Negro, fill up. If you get low on gas, You can buy gas from various "resalers" at Cataviña and other place for a bunch more than retail. If you get in trouble, stop and ask somebody where can you get gas.

Had fun at the military stops.  Most of the young men wanted to flirt with our granddaughter Erika. Naturally I didn't take advantage of the situation...  One young man asked if she was my daughter, I said, "no, she's my granddaughter." He then asked if I would like to be his grandfather. Instead of saying no and risk insulting him, I explained that she was already taken and had a 2 1/2 year old son. He didn't seem the least bit bothered by that. 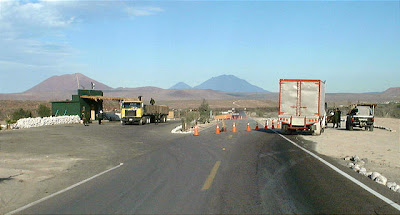 By the way don't be nervous at the military checkpoints. If you don't have drugs or guns or some other obvious thing that could get you tossed in the slammer, you are ok. These kids are bored, tired of each other and most are a long way from home. I've never been robbed or felt threatened by these kids. Think of your kids or friends kids who are away from home for military duty. A big smile and friendliness is usually reciprocated. I sometimes have stuff in the car to hand out like candy bars or bottled water. They are normally very appreciative. Read this if you've never driven the highway. 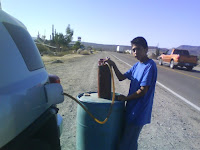 We stayed our last night at the Hotel Santa Fe in Loreto. There's a big sign outside that says, "$490 pesos per night" or something. It's misleading. That is for single occupancy. My buddy Larry (lawyer in his last life) wanted to know why our quote was more than double the price shown on the banner outside. The clerk explained. Larry said said something to the effect that it was a scam and a ripoff. The clerk replied very politely, "Yes, I know. It is our policy." I mean, how do you respond to the the brutal truth? It was pretty funny. By the way, the hotel is nice, has large rooms and a decent restaurant attached. Also has secure, walled parking.
That's about it. I didn't say a lot about road conditions because they are so good compared to only 10 years ago.